The closer to a building, the clearer the details.

But then you miss the contours. PANURBANA shows both.

I photograph buildings and I call that photo collection Panurbana.

PAN stands for Panorama and Urbana for city.

I photograph the buildings from a fixed point of view and take different photos.

After developing the film, I glue the photos together and create a collage. A Panurbana.

I experiment and explore time, space within the photo.

Marc is a storyteller and he does that with images.

Two or three-dimensional and moving or not. Images that encourage you to look into what you can get lost in, and leave space to the imagination.

His photography is a quest: How much image do you need? When does viewing change to seeing? And seeing and experiencing and imagining?

In January 2020 I started posting a weekly photo of 'a Panurbana' that I took all over Europe.

Until the Corona epidemic started and I was confronted with

the empty deserted streets and canals in Amsterdam.

and share them with the world on a weekly basis.

Buildings from my childhood I capture in parts,

stick them together and rebuilding the city.

I made my first panorama photos (about 1988) while studying sculpture at the art academy.

On a holiday in France I wanted to photograph an old Romanesque church.

It was important to photograph the church in its entirety, but also

capture the details of the apostles around the front door.

By taking several photos and then gluing them back together in a collage,

I got a whole but the details were preserved.

A perfectly fitting Panurbana where the different photos

connect neatly, I would think sow.

It would be much easier and less cumbersome to shoot the

Panurbanas digitally and edit them with photoshop.

The result would be an impeccably perfect Panurbana.

But Panurbanas are shot analogously.

With an old Nikkormat FN an almost completely mechanical camera.

The exposure meter (should) work on a battery.

I develop the film myself, like an old alchemist.

properly exposed. The photos don't quite fit together because of

I'm rebuilding the city's buildings in a Panurbana.

Our brain corrects our eyes for the perspective errors.

So that a new illusion of a building is created.

In honor of the 10th Panurbana, panorama video, a special ART Puzzle of 500 pieces has been made.

Now for sale Panurbana, Westertoren
Sent an email for: numbers of puzzle pieces an prizes 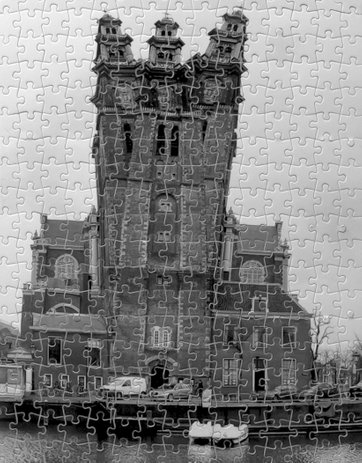